The islands of the Galapagos lay 1,000 miles astern, Pitcairn Island is ahead 1,700 miles. Between is nothing but the winds, sky and blue ocean of the South Pacific.  The large seas and swell have laid down some from a few days ago, although we still have long swell rolling up from the south. No doubt a storm or low pressure system in the Roaring Forties far away sent this undulation our way.

Conditions are pretty sweet at sea today for the crew of the Barque Picton Castle. Plenty of bright blue sky, sea a dark blue, snowy white caps atop the waves’ crests here and there. Steady and warm southeast tradewinds pull us along this long road toward tiny Pitcairn Island. Force 4 on the Beaufort Scale this breeze is called by sailing ship seafarers; between 11 and 16 knots that would be. From time to time we have been accompanied by friendly dolphins cavorting in the seas and pilot whales who are more sedate. Every now and then a huge school of flying fish takes to wing, perhaps jumping ahead of some fish below with big teeth. A single tropicbird has been following us for some days. These pretty white birds usually fly in pairs. Stormy petrels were with us a few days ago, gone now.

Sometimes the winds pipe up and the flying jib and gaff topsail get taken in and stowed, to be set again soon enough, pulling us along to the southwest, mile after mile.

An hour of helm, steering the ship at the big teak wheel is a delight on a day like today, the beam wind to the sails all drawing and well balanced.

No weather helm if the mates have her braced and the sails trimmed just so.

Forward lookout up on the foc’sle head is a treat in these conditions as well. An hour to one’s self, being the eyes of the ship, beyond the eyes of the ship. The arc of the foot of the fore course right at your shoulder tacked down to the weather cat-head. In quite large ships with wire buntlines, a sailor on lookout could grab ahold of a bunt and get lifted off the deck with the pull of the sail, only to be set down gently as the ship lowers her shoulder to a sea. All four headsails drawing, sheets and sheet pendants taut to leeward. If dolphins are playing at the cutwater the lookout gets a special performance. All is quiet on the foc’sle head for the lookout. Just the wind in rigging and the rush of the seas along the bow.

Not much to see but sea and sky, and a soft period left to your own thoughts. “Look out” is a state, a condition, that could be filled from the quarterdeck by the mate of the watch in conditions of today, but is still all to the good to have an extra pair of eyes up forward looking out to see what they can see. The surviving crew of the lost schooner Pride of Baltimore were passed by several cruise ships in daylight in fair conditions over the four days as they drifted about in their liferaft. No one on the high bridges of these sophisticated ships saw them in their bright coloured liferaft bobbing around east of the Bahamas until finally a cargo ship with some alertness on the bridge found them and hauled them aboard. What kind of lookout were those other ships keeping? Not much out hereabouts but you never know.

Today is Saturday. Today we work at ship’s projects until noon and then clean up and take it easy just steering, keeping a good lookout, got to make food of course and ship checks, but anything apart from critical repairs can wait to get back at them on Monday. This afternoon, we wrap up our sailmaking, new varnish jobs, welding the doorframe into the foc’sle, scraping and revarnishing the ship’s original teak doors (can’t get teak like that anymore), cleaning our many tools – just put it all away – then maybe to work on our ditty bags, practice our sextant work, catch up on washing clothes or doing nothing at all until it is time for a trick at the wheel to steer our ship over these long South Pacific ocean swells, bound for Pitcairn Island. 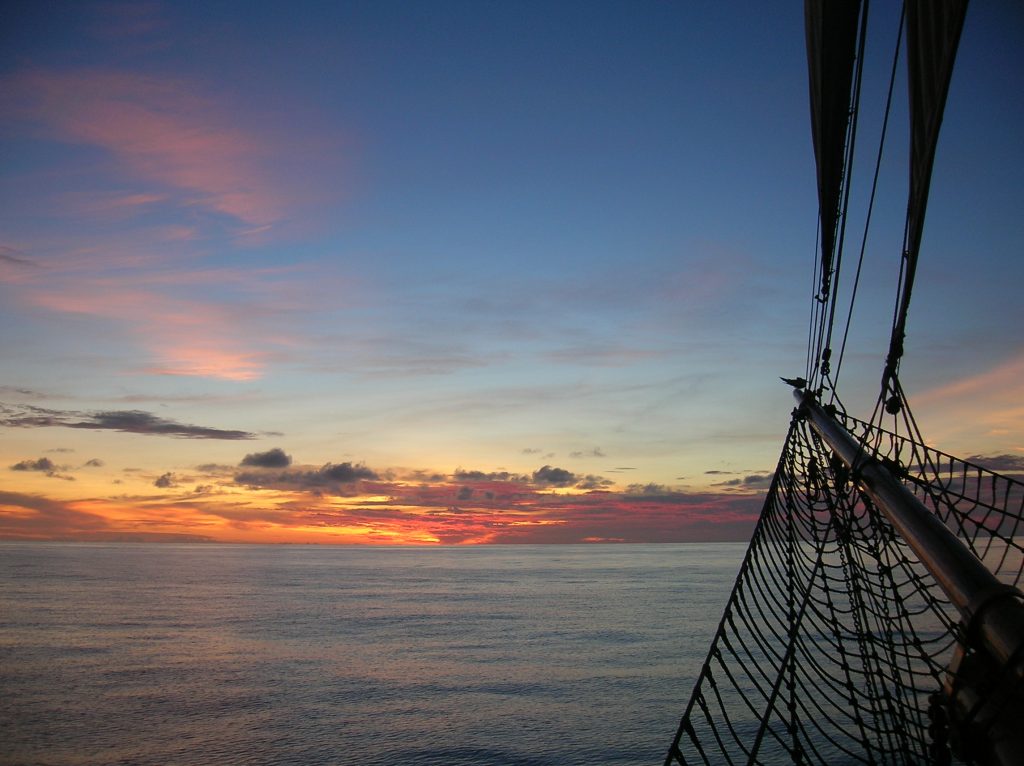